Like many of you, the COVID19 crisis forced me to adapt my travel plans for the year. Long (very long) story short: I opted for a safe roadtrip in a neighbouring country I know very well, France!

Let’s start the summer holidays in La Rochelle – 3h by train and between 4 and 5h by car from Paris, but also a Ryanair airport nearby.

La Rochelle has an amazing city centre. You can easily walk around for several hours around the old port, the old town and along the water. 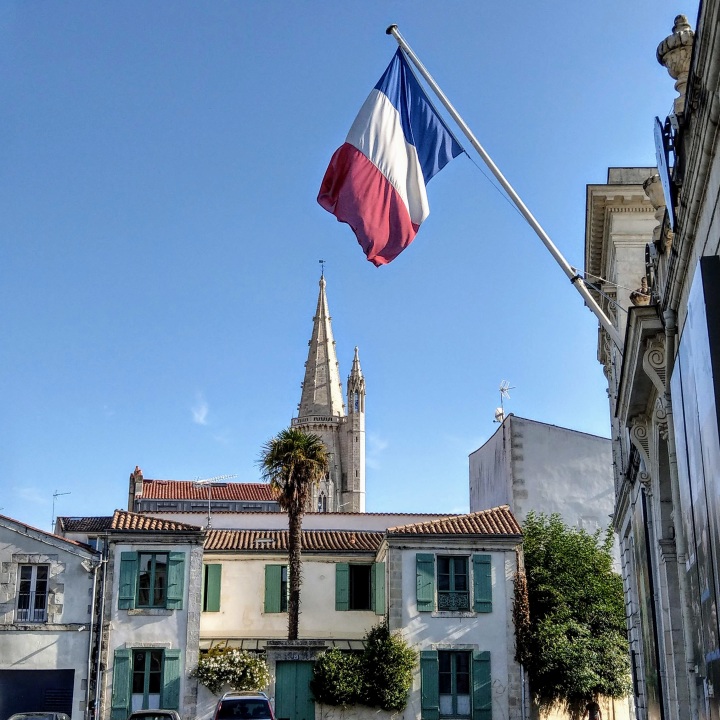 I was so happy to be finally out of Belgium and my flat after months of lockdown that I really wanted to spend most of my time outside in the sun but you can visit the three impressive towers in the port and also the famous Aquarium.

A day on the Ré island

From La Rochelle you can also take a boat (23€ return) to the neighbouring île de Ré. You’ll arrive in the cute old port of Saint-Martin-de-Ré. Walk around the old town within the UNESCO-ranked Vauban fortification for a summer feeling and don’t hesitate to climb up the Saint-Martin Church for a few euros. 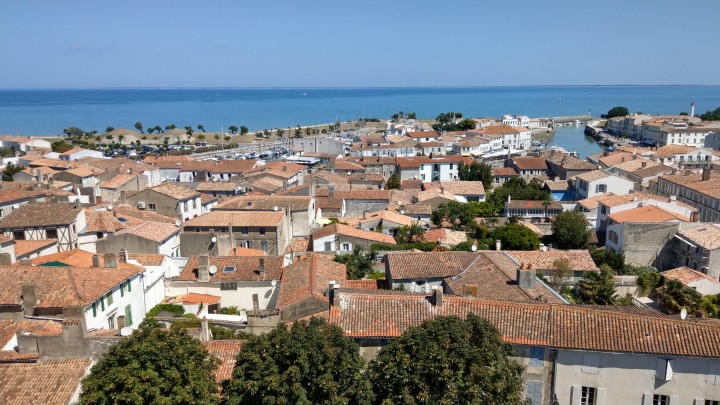 Don’t hesitate to take a bike on the boat with you or rent one there! The island has a wide network of cycling trails to cycle around nice vineyards.

Between Saint-Martin-en-Ré and La Flotte, I recommend you a lovely walk by the water (promenade de la côte). I had a feeling of Southern France!

Next step in the road trip: the second largest island in continental France, Oléron! The island is located one hour away by car from La Rochelle.

We rented a lovely cabin with a big terrace in Le Château d’Oléron, a small town famous for its colourful… cabins and also thans to other Vauban fortifications.

On the first day, we went on a 40-km bicycle ride (very comfy bikes rented here) on the island (all flat, and also covered in cycling paths) from Le Château-d’Oléron to La Côtinière for lunch, through Saint-Pierre d’Oléron, salt marshes and back down to Château-d’Oléron. A great day! 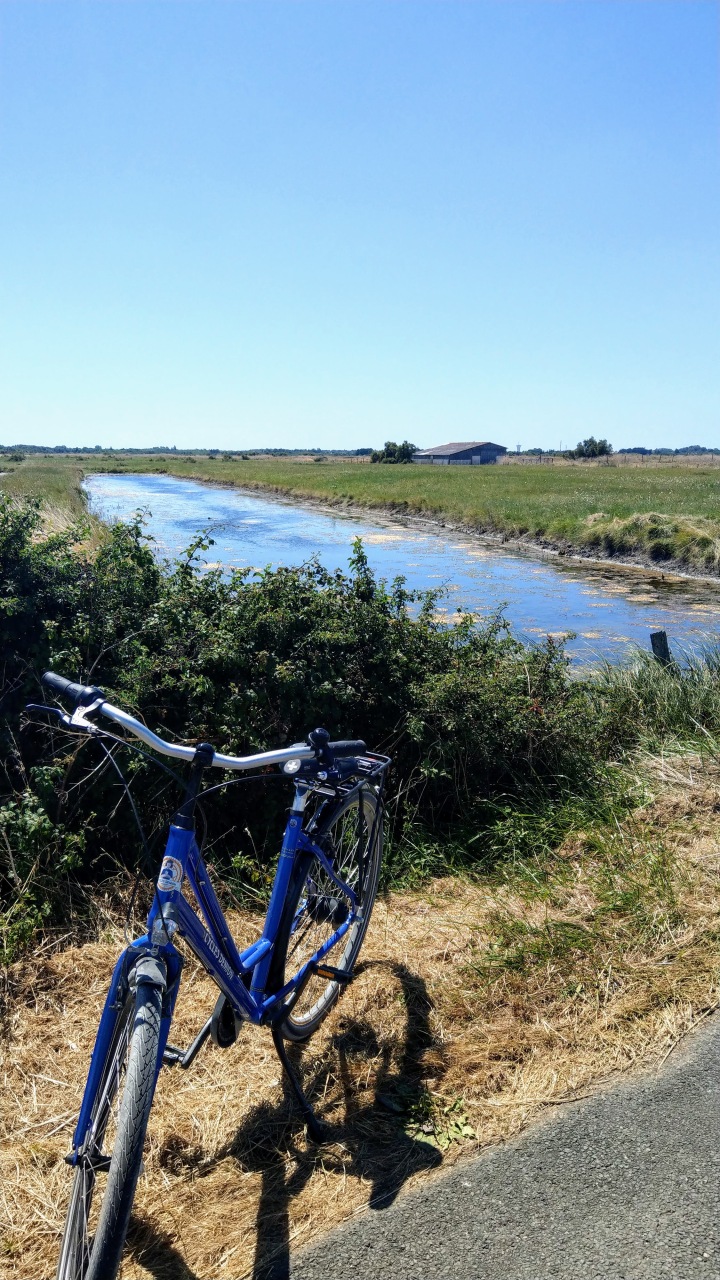 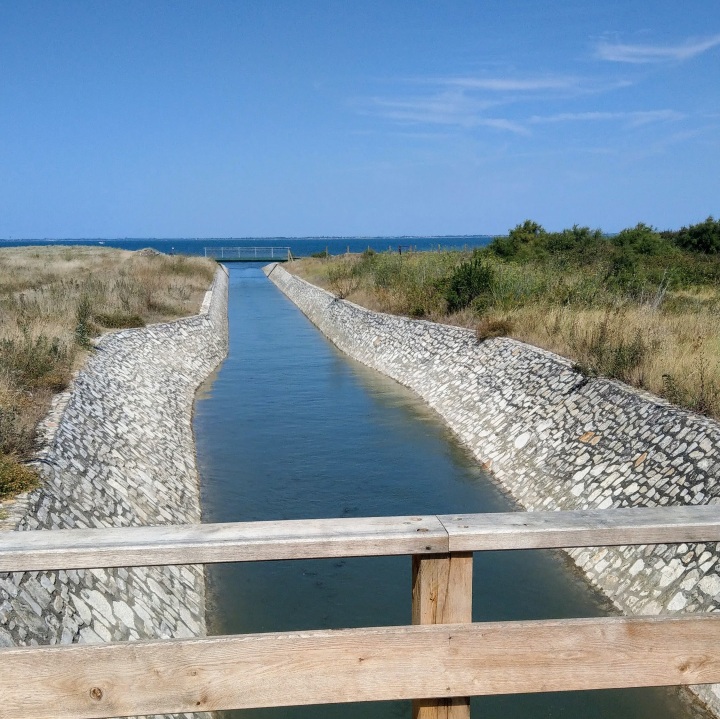 On the second day, we took a boat to île d’Aix from Boyardville. You can walk around the small island in about 2hours and a half! And it’s lovely: you will discover hidden forts and secluded beaches.

Small tip: treat yourself to a nice ice cream at Les Paillottes. 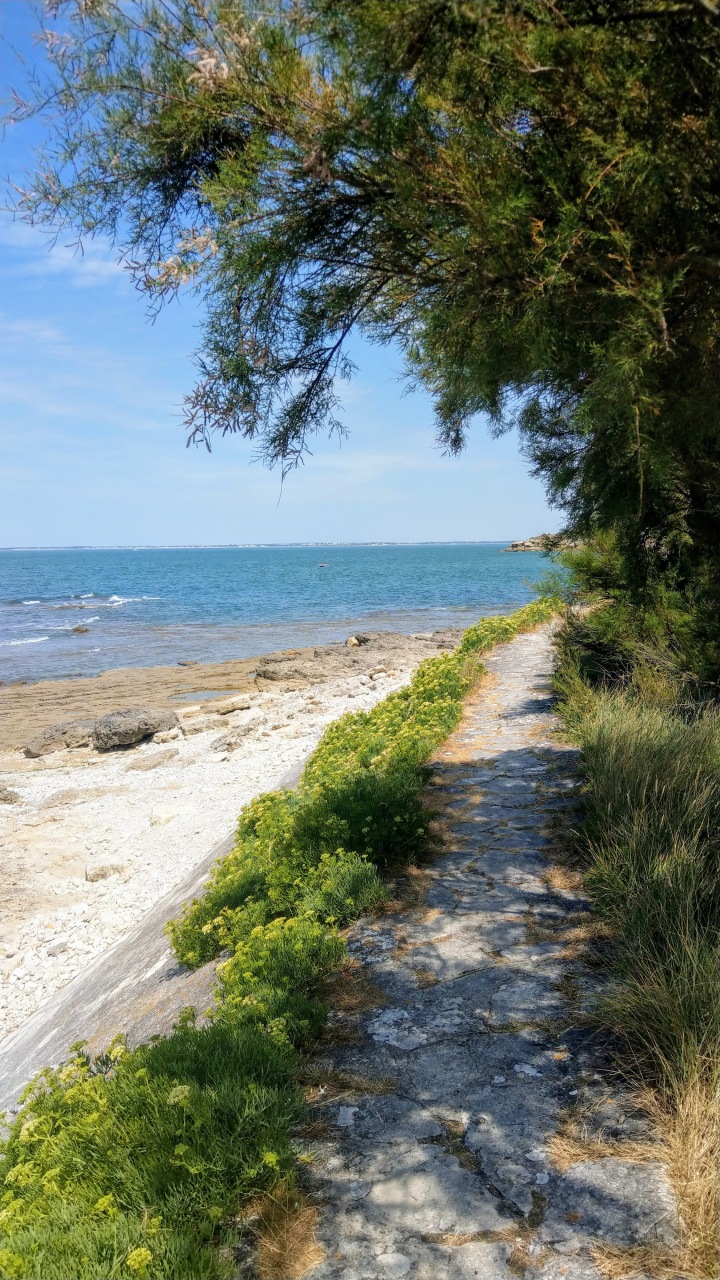 On the way there, we saw Fort Boyard, a fort whose building was initiated by Napoleon Bonaparte but ended so late it was never actually used for its initial purpose. Fort Boyard is very well-known in the French-speaking world for a TV show shot there every year. It brought some many nice memories!

Time to leave the sunny island…. On our way to our next destination we made 2 quick stops.

We stopped among the vineyards of the famous Bordeaux wine to have a nice lunch on the main square of Saint-Emilion with a beautiful view on the monolitich church.

If you go to the Tourism office, you can get a key to climb up the church in exchange for a few euros.

We then made a short stop in Perigueux for a quick ice-cream (at Le Glacier de Périgueux!) and check out the impressive cathedral and the small medieval streets.

We chose to stay in Cenac-et-Saint-Julien, near Domme. Domme is a beautiful village on top of a hill with a terrific view over the Dordogne river. You can visit some beautiful caves there (ideal during a rainy morning!), see some ancient graffitis once attributed to the Templars, and walk up and down the old streets.

There are also many many hiking trails in the Dordogne valley. As the rain had stopped, we selected this one around the Dordogne advertised on Visorando and ended with a nice drink at the bar of the Musée de la Rue du temps qui passe, probably also worth a visit. The owners are lovely! 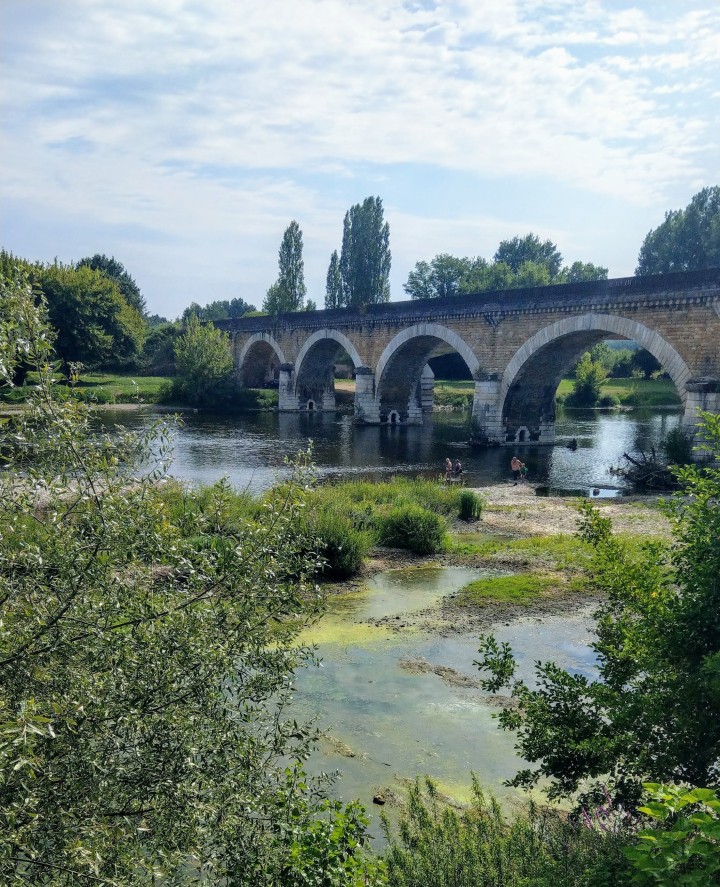 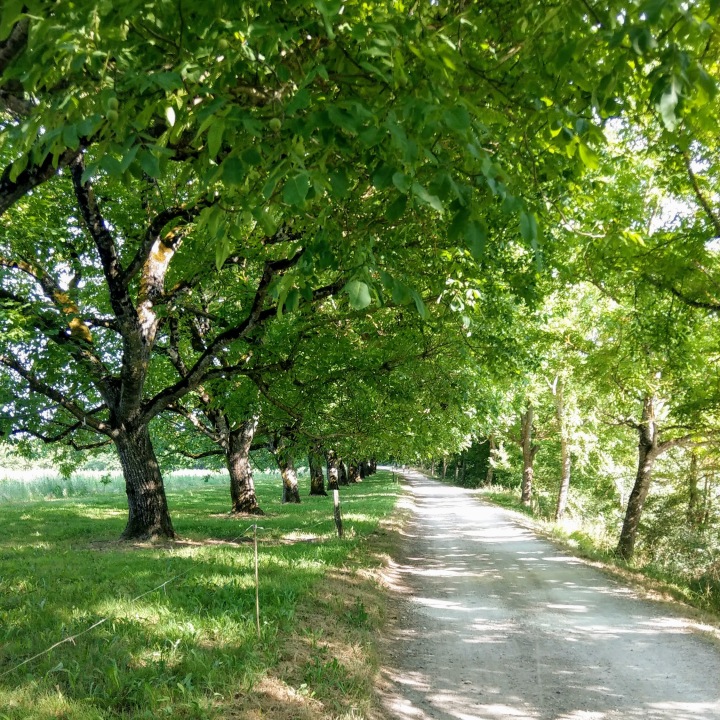 On the next day, the rain had definitely stopped and we could kayak down the river. We chose Canoe Raid Cenac as it was only 5 minutes away from our accomodation. There have several formulas: we selected a 2h30 canoe ride from Cenac to Beynac.

The scenery is really fantastic on this route: first La Roque-Gageac, elected one of the most beautiful villages in France, and its houses hidden in the cliffs and the magnificent cargo barges.

And then 2 medieval castles one right after the other: Castlenaud-La-Chapelle and Beynac.

After seeing it from down there, we climbed up the castle of Castelnaud a few hours later. (not right after, first the bus from the canoe rental took us back at the starting point) The castle (10,90€ in July 20) has several animations for kids (but not only!), a nice weapon exhibitions and very well renovated rooms. There’s also yet another stunning view on the valley.

For our last evening, I wanted to introduce my boyfriend to Sarlat-La-Canéda, a cute city I visited with my parents when I was younger. Unfortunately, it seemed like I was not the only one to have the idea… even in coronavirus times, the pretty city was chockablock. After queuing to eat a quick menu right in the old centre, we nevertheless managed to escape the crowds by going in less busy streets such as Rue du Siège and Rue Jean-Jacques Rousseau.

The last part of our road trip took us in Auvergne. We mainly spent some quality time with friends but I still have a few tips for you.

After two previous unsuccesful attempts due to bad weather conditions, I finally managed to go up the Puy de Dôme, the highest volcano among a UNESCO-ranked chain of lava domes in the heart of the Massif Central. You can take a small train, Le Panoramique des Dômes, to the top or walk up (and of course walk down) on one of the trails.  The train runs regularly and prices vary depending on the season but slightly on the expensive side. Same for the food you can get on the top, so don’t hesitate to take a picnic! 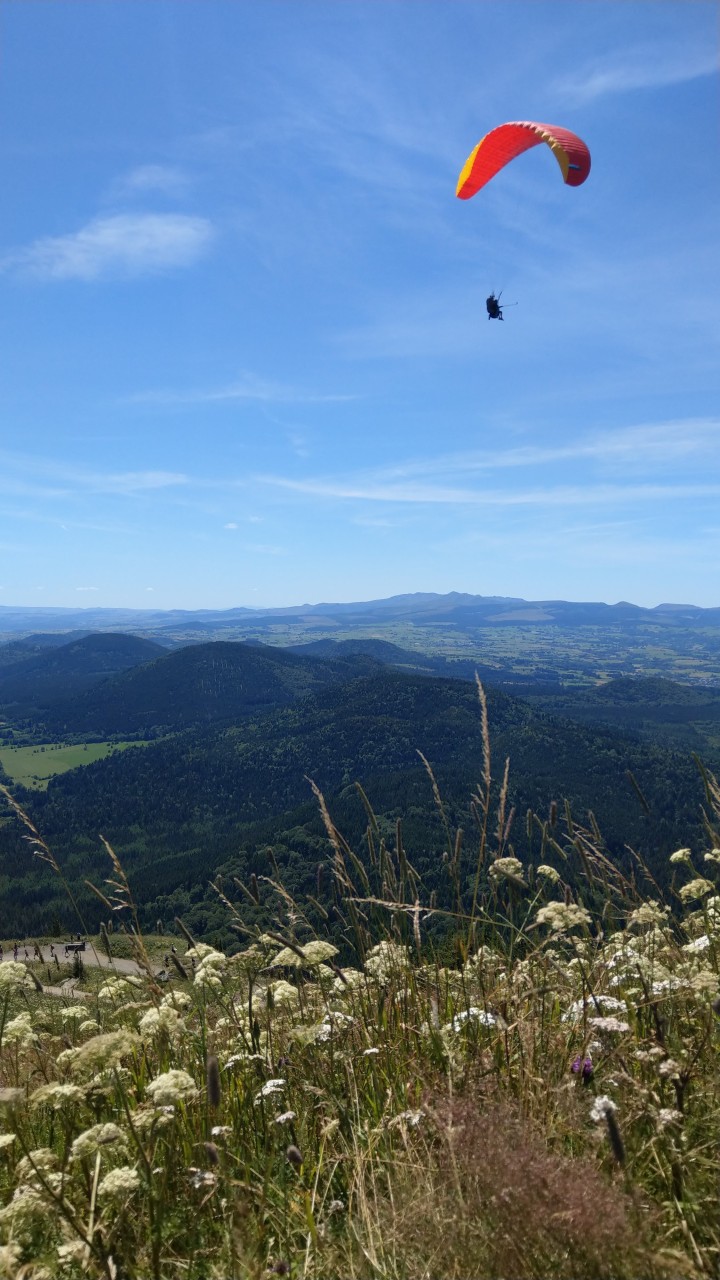 From my previous visit in autumn, I’d also recommend: 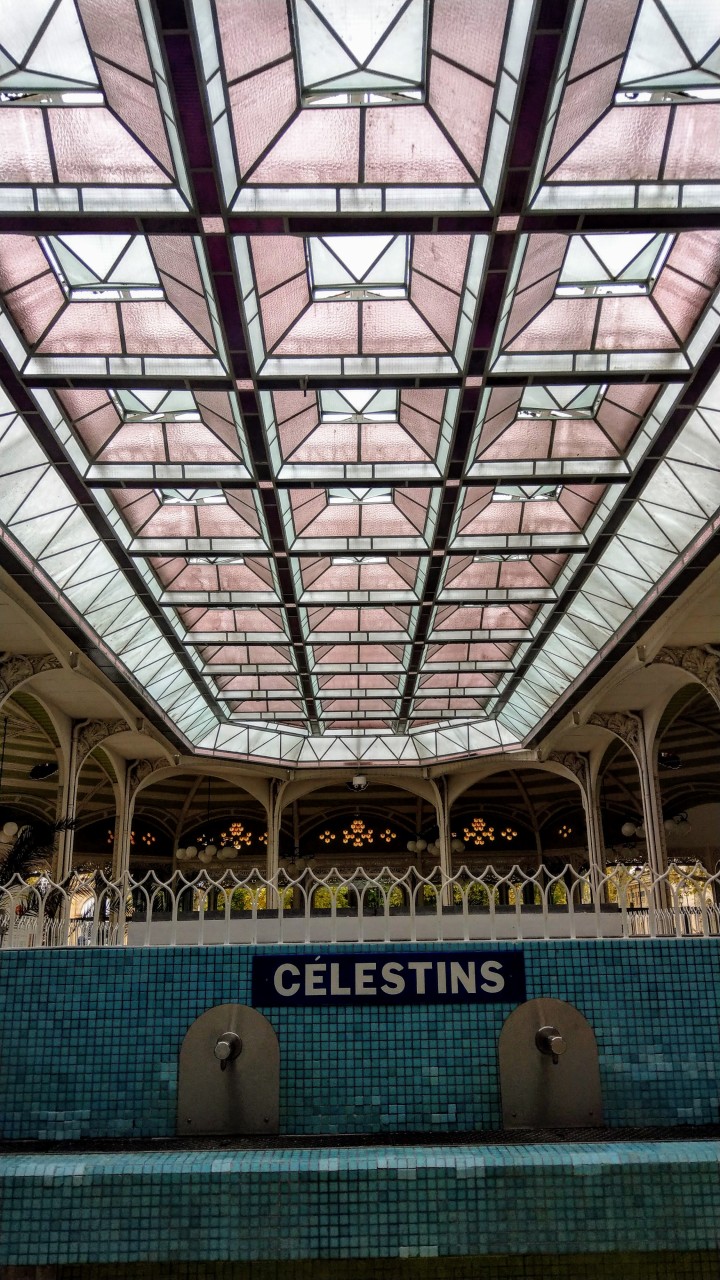 This is the end of our road trip. Hope you discovered some new areas in France!

All my tips here: